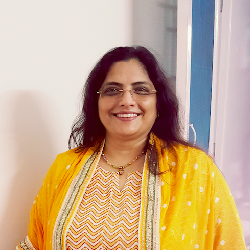 After spending over 20 years in the Corporate world as Media Planner, Buyer and Communication & Brand Consultant, annu is devoting most of her time and energy to facilitating transformation in people and their lives. Having dealt with innumerable emotional, financial and physical challenges in her own life, annu made sharing her learnings with people to support them as a way of life. She found that her spiritual journey within, through meditation and understanding of the Scriptures, has enabled her to be in the position of not only living a happy and peaceful life but also being able to guide people to deal with their own issues.

She conducts Workshops & Corporate Training for organisations such as IBM, gives personal counseling sessions, does guided meditations as well as writes extensively on the subject of spirituality and interpretations of traditional wisdom in the modern context. She is invited to speak at forums such as YPO, FICCI FLO, Delhi University, Zorba the Buddha and also as a Visiting Master at Ananda in the Himalayas. She is a Coach and Counselor to many people including successful corporate people and some celebrities from the performing arts and Cinema. Read the FAQs section to learn more about her approach towards adding value to peoples’ lives.

As part of her attempt at making traditional wisdom relevant to modern times, annu runs a Café Spirituality group. These used to be open freewheeling discussions at a pre determined time in any venue like a coffee shop, park, lawns, someone’s home, club hall – a modern version of Satsang. Post covid times the concept further adapted to including Zoom sessions, Book Reading, Spiritual walks. Having completed the Teachings of Ramana Maharishi, Osho on Krishna, Iam That by Nisargadatta Maharaj, currently the Ashtaavakra Geeta is being studied in the weekly Book reading zoom session. These are open discussions where people engage in exploring the subject and deepening their understanding.

Even the traditional Sunderkand path for Hanumanji held at her place has a modern spin where after the normally performed rituals is an interactive discussion on decoding the Deities and the associated stories. The people attending are as varied as House Wives, Vedantin Sadhu, officials from MNCs, Fashion Designers, Entrepreneurs, Doctor, Students and Civil Servants.

She conducts workshops on Applied Spirituality, in person as well as on Whatsapp & Zoom. A firm believer in people’s right to practice their own faith she is ever seeking to expand her own understanding of and participating in other religions in different ways, be it writing article on the similarities between Kabalah & Hinduism for a magazine or holding an Iftar party at her own home.

Constantly looking for opportunities to touch and impact more lives annu rallied with the residents in her colony and along with few volunteers had started community chanting of Hanuman Chalisa  in the Temple in her block.

Knowing firsthand the level of stress that people working in the Corporate sector constantly deal with, she has developed Training Programmes  specifically for them. She draws upon her understanding and training from the wide range of practices & techniques such as Yog, Tantra, NLP, EFT, Vipassana, Positive Psychology, Mindfulness, Mantra chanting and most importantly her experiences from the challenges she was able to overcome in her own life – physical, financial and emotional. To be able to support and help others who maybe going through similar challenges is her stated agenda!

Annu spent over two years to develop her Self-help system in the form of deck of cards and book called  ‘Aavirbhhav’ – Hindu Deities Guidance & Meditation Cards. All 56 visuals used in the cards and book are images of annu’s paintings. Covering the launch of the book at the Constitutional Club of India on 25th August 2017. TOI reported –

“The star-studded event was graced by the presence of several eminent personalities from various fields with the Chiefguest of the evening being the Padma Vibhushan awardee, veteran educationalist Dr. Karan Singh.

Aavirbhaav is a synthesis of Annu’s journey of self-exploration and meditation that amalgamates concepts and beliefs from the numerous systems that exist in the rich Indian culture and presents it in a self-help format of guidance and meditation cards. Each card is a representation of deities from various traditions including Vedas, Puranas, Tantra, etc. The section on Meditation in the book is highly recommended for people looking for a logical understanding of the spiritual approach.

She was awarded for being an ‘Iconic woman making the world a better place for All’   at the Women Economic Forum 2017 in New Delhi.

Though she is a post-graduate in Economics and has received no formal training in Art, she participates in Art shows with her mystical art paintings, which have been very well received. She was awarded for ‘Excellence in Art’ by the Bharat Nirman Foundation in 2016 and Tathastu Award 2017 for her outstanding contribution to Art. She was nominated for the HT Woman Award : Culture Master in 2018. Images of her paintings can be seen in the Mystical Art Gallery and her writings can be read on her blog Musings.

Article about annu in Empower, an Outlook India publication

Featured as an Inspirational Woman